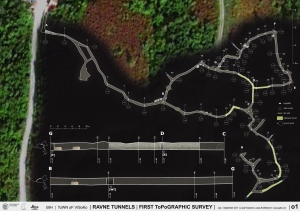 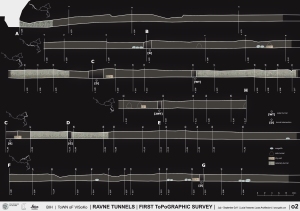 The aim of the study is to explore the shape of  Ravne’s tunnels, their geometry and the mechanical / aesthetical meaning.

The analysis started from a topographic survey that may put in evidence, by the graphic representation, a detailed description of the Ravne underground as it appears up to today. There are a lot of mysterious aspects over there, especially for the presence of the parabolic curves and the catenary principle in the development of the tunnels through / by the concrete (as it seems), as well as the help of some drywall ( a kind of). All  this leads to believe in an hypothetical and extraordinary design concept, done by whom and for what?

The use of these shapes has a mechanical origin. Indeed, there is a manifold of physical principles, characterized by a set of relationships whose expression ultimately takes the form of a work of art. The roots of this physical geometry go back to the discoveries, in ancient Greece, of Thales, Pythagoras, Plato, Archimedes, all of whom—unlike the presentation provided by Euclid’s Elements—derived the principles of geometry from investigations of physical principles. From Galileo to Eulero, from Leibniz to Gaudì,  through the Gauss’s theory,  they all tried to find out a mathematical function, because of the greatest advantage of the inverted catenaries that are very efficient in carrying heavy loads with a particular poetic idea of shape.